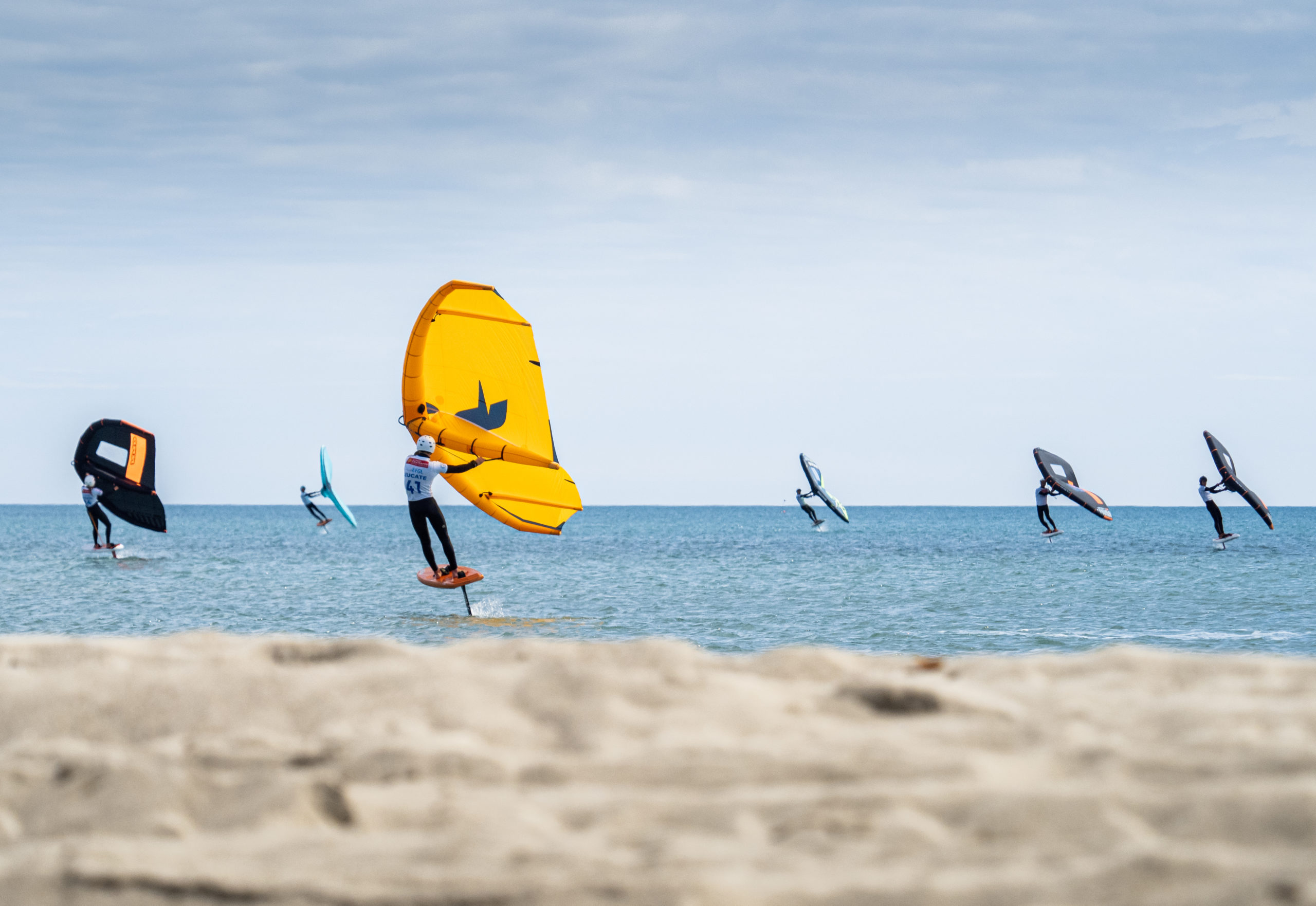 Today we had our first sunny start here in Leucate! The substantial breeze blew hope through the air during the morning skippers meeting.

Aiming to speed up the tempo of the event, judges planned to kick off with the Surf-Racing discipline. Riders were told to remain alert for the calls, as the GWA Wingfoil World Tour race director Dani Jimenez and GWA head judge Mallory de la Villemarqué headed to the beach to plan the race course of the day.

Shortly after, the tractors were loaded with foils, and the riders made their daily commute to the competing site. Things were looking promising. The sun was persisting, and the wings were flapping in the breeze as the riders set up for action. By Midday, the breeze was substantial enough to have all the excited riders in the ocean testing out the course.

Due to the flat and light conditions, the judges separated the course into three short parts separated by two buoys.

Don’t let the distance fool you. The course may appear short, but it is equally as potent! Especially the second half!

Throughout the course the riders will find themselves in favour of the wind, against and even a part where they cannot use their wing at all. They have to cross by pumping.

There is an incredible amount of timing involved in a surf-race. When the red flag rises, riders have exactly 4 minutes to get to the start line. If a rider crosses the line the minute before the green flag rises, they will be disqualified and must commence the entire heat. We don’t know about you, but that sounds like enough to get our hearts racing before the race even begins!

It takes an immense skills to maintain calm and balance on the gear in light wind whilst ensuring you keep the perfect speed per each second that ticks on the clock.

The green flag gives the rider the go-ahead to cross the line and make their way down the first section of the course. The first buoy is intentionally set up downwind from the start line so the riders cannot use the power of their wings just yet!

Only when they reach buoy number one, do the Wing kicks in as the course changes direction where riders continue to race upwind to buoy number two.

Finally comes the real leg burner. The riders must release their Wing and pump to the finish line as fast they can. The first one to cross it, wins!

Pro freestyle kitesurfer Paula Novotna (CZE), one of the most dedicated off-the-water athlete confirms – this final stretch is no joke.

“Pumping on the foil is exhausting! It’s like a burner and workout for your legs so for sure, being fit on the water helps with every kind of Watersport.” -she says.

If it tires someone as fit as Paula, it is most likely is a recipe for spaghetti legs for the rest of us. So we better get training!

At the beach, we caught up with RRD rider Francesco Cappuzzo (ITA) to ask him about his race gear setup. He has been heavily involved in the R&D process of the gear from the beginning of their Wingfoiling journey.

He explains that the Wings for the Surf-Race discipline tend to be smaller, creating more speed for less resistance and drag. Boards are smaller as well as the rider needs to get up on the water only once and the goal is to never touch the water.

We dove a little deeper into the evolution of the gear, and he sees it evolving in two ways.

Entry level equipment: Strong, Powerful, easy to use and fast.

“It’s really hard to distinguish the shape of the gear. It’s very small details that make a huge difference. One may look better from far but a centimetre can make a world of difference in performance. Unlike most board sports, the board itself is the least important part of the setup. You are rarely on it. The most impactful are the Wing and Foil. They are what you use to fly.” – explains Cappuzzo.

The high-performance gear is doing its best to keep up with the insane rate of evolution of the athletes riding possibilities. Klaas Voget (GER) Duotone Wingfoil R&D and Team Manager explains that the gear specs could go any way at this point. This is why Duotone Wingfoil keeps its primary focus on nailing the entry-level gear, which is realistically the more achievable goal.

There seems to be a common goal to encourage anyone and everyone to try this new discovery the riders are passionately sharing with us.

“We are developing most of the new gear to be as strong as we can. We know it’s expensive, so we need it to last to make it an affordable investment.” – Francesco Cappuzzo confirms. “We spend so much time behind this product, on what is behind the aesthetics of it all. We hear a lot of: ‘this thing looks so ugly I’m never going to try it!’ But when they do try it, it will change their worlds!”

There is no certainty what the future of this sport will bring, but the riders are sure about this: “Wingfoil is something from almost all the water-sports: surf, windsurf, kite and sup. The most important thing is that people try. When they will, Wingfoiling will explode. The community can be HUGE. All the athletes can unite and inspire innovation.”– Cappuzzo explains.

By 16.00 pm, the anxious riders were released, as they could no longer bear the taunting of the wind driving them on and off the water throughout the day. Judges want to ensure they keep their energy for tomorrow’s potent forecast!

Everyone is looking forward to it. The action-deprived athletes are craving to show us some action tomorrow, so stay tuned for D-day!