After an epic climax to the Surf-Freestyle championship on Friday, focus shifted to the Surf-Slalom fleets on day four of the Copa Kitley GWA Wingfoil World Cup Brazil.

It was crunch time for Titouan Galea and Flora Artzner who have led this three event championship all season.

Things are simple for reigning champion Galea. If he wins this event, that will be another championship in the bag for him.

Technically, Mathis Ghio was also in with a shot, but he’d need a relative disaster to strike Galea for that to happen.

On the women’s side, yesterday’s Surf-Freestyle event winner, queen of the waves, Flora Artzner needed to only finish fourth or better to claim her first title.

All Nia Suardiaz can do is try her best to win the event, and hope Flora lost her rhythm and finished fifth overall after all racing at this event.

So, where would the battles be taking place?

The course design off the Taiba village coastline saw riders come steaming out of the start gate before rounding the first buoy on port to take on a tactical upwind battle to the top mark.

A short blast across wind brought riders onto the pure pump track.

While holding the wing’s flagging handle – only efficient leg work and help from any swell lines would bring the biggest advantage here.

Rounding the mark at the end of the pump track, riders powered up their wings as fast as possible to rip along another broad reach before a little gybing zig zig, and then it was a final hack to the line.

The men smashed through two full elimination battles, each consisting of four heats, two semi-finals and then a final. Finish in the top five in each heat and riders would advance on their way to the final.

Galea proved unbeatable. Outwitting his competitors on the upwind legs, he then glided easily through the course to win both finals.

Sadly for Cappuzzo he had a big clash with Mathis Ghio at the end of the pump track in the first elimination final, but recovered to finish fifth in that race and lies in second at the end of the day’s racing.

In the women’s, Nia Suardiaz turned up with her engine revving hardest today, streaking to six race wins from six!

The young Spaniard piled the pressure on Artzner who had a mixed bag of results.

Flora is in third at the event after six races, behind Novotna and Suardiaz.

Dudu Mazzacato leads the standings in the South American Championships that were also running today.

So a big day coming up on the final day – can Flora cling on and who can halt Galea’s dominant charge to the title?

Watch how the competition unfolds live on the stream which will begin again on Saturday morning – find all you need on the event live page here. First possible start for the action is 11.00 (GMT -3) 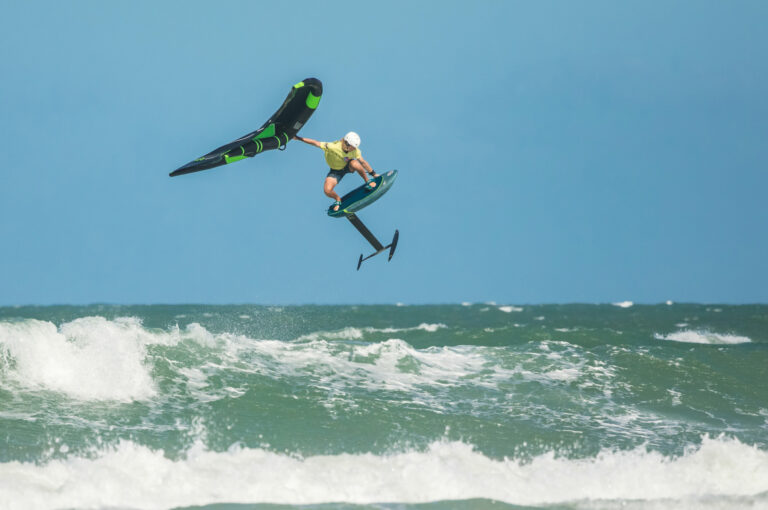