Luck was on our side for the final day of competition of the Tarifa Wing Pro, where we managed to complete the full Surf-Freestyle discipline, Race discipline and ended the day crowning our new GWA Champions.

It was an early start, with the crew and athletes ready on the beach by 7.30 am. The levante wind started to blow, giving us 8 – 16 knots, sufficient to get the Surf-Freestyle Elimination going.

The last four heats of Round 3 were completed, where we witnessed a tough face-off between Stefan Spiessberger and Balz Muller, with both riders in fine form. Balz pulled out an outstanding Frontside 7 for his 9th trick attempt, scoring 9 points, the highest we have seen in this competition. This allowed him to advance to the next round over Spiessberger. Also passing through to the next round was Fabian Muhmethaler, Maryzko and Titouan Galea, who defeated Camille Bouyer leaving him out of the title-race for this year.

Young local rider Lucas Roguet blasted his way through Heat 49, defeating Mathis Ghio. This was followed by Julian Salmonn knocking out Francesco Cappuzzo in Heat 50, a major disappointment for Cappuzzo who still had a chance of becoming World Champion if he were to win this event, and if Titouan Galea did not advance further than Round 4.

Riccardo Zorzi and Malo Guenole are two very young riders with a promising future. Both are pushing the sport in incredible ways, and for Heat 51 they were close in points, but it was Zorzi who managed to gain a lead and advance through another round ahead of Guenole.

Gregorio Pugliese also advanced over the youngest Zorzi brother, in Heat 52. Hugo Marin joined him in the next round after landing a nice Frontside 3 and eliminating fellow Frenchman C.Hamon.

Maxime Chabloz has been riding solidly throughout this event and Heat 54 was no exception. His classic Backflip scored him 7.17 points and he advanced over Xavi Corr.

Balz Muller was fired up for Heat 55 where he faced local athlete Fabien Muhmenthaler. They were neck and neck, each throwing tricks very similar in points, but halfway through the heat Baltz landed an incredible 9.33 point Frontside 7, and stole the win.

For the final heat of Round 4, Titouan Galea showed no mercy, landing trick after trick and securing his spot in the Quarter Finals.

Julian Salmonn has been showing some amazing progression at this event, and for Heat 57 he landed 5 of his trick attempts, gaining solid scores and allowing him to pass into the Semi-Finals of this event, over local rider Lucas Roguet.

Riccardo Zorzi is just 15 years old, and at each event he is showcasing some incredible talent in this new sport. For Heat 58 he went all in to defeat another Italian rider, Gregorio Pugliese. Zorzi landed a Frontside 3 and a Back Loop both with scores in the 6’s to lock down his spot in the Semi-Finals.

One of the most intense heats of the day was Heat 60, where Balz Muller faced our new World Champion Titouan Galea. Both of these athletes are legendary watermen, and a vital part of this fast-progressing sport. Titouan, having already secured the World Title for this year due to his lead in points, was now focused on winning this event. His Back-Flip scored him 8.2 points and he was locking down impressive scores, but Balz Muller was absolutely on fire. He landed a Radiculo 7 scoring 9 points, followed directly by a Frontside 7 scoring 9.5 points, leaving Titouan with nowhere to go. Muller advanced to the semi-finals with an overall score of 30.74, the highest we have seen in the event.

Riccardo Zorzi continued building upon his impressive earlier performance, landing the majority of his trick attempts and achieving 4 scores in the 6’s. Julian Salmonn made a great effort to catch up to him, but Zorzi closed the heat with a massive Frontside 7 scoring 7.73 points, opening the door to the final for the young Italian.

The second Semi-Final of the day saw Balz Muller push hard once again, though not gaining scores as high as in the previous round. He gained a slight lead over Swiss Maxime Chabloz who couldn’t quite gain the scores he needed, and went through to face Riccardo Zorzi in the finals.

Julian Salmonn and Maxime Chabloz hit the water at midday in the small final, to decide who would finish 3rd and 4th at this event in Tarifa. Salmonn started strong, but then crashed 6 of his trick attempts in a row. Maxime Chabloz seized the opportunity, and pulled out some outstanding tricks, including a Backflip, Backside 3 and a Frontside 3. He took the lead and grabbed the 3rd podium position for the Tarifa Wing Pro.

The final was a major showdown between experienced waterman Balz Muller, and 15 year old up-and-coming rider Riccardo Zorzi. Balz wasn’t messing around for the final, and locked down an 8.03 point Backflip to get started. Riccardo Zorzi was fully focused for his first-ever final, and he threw down some massive tricks, with incredible height and execution. His Frontside 7 scored him 7.5 points, and together with his 3 other high-scoring tricks, he took the win by less than one point from Balz Muller. It was a truly incredible result for this 15 year old rider!

The final results for the Tarifa Wing Pro Surf-Freestyle discipline are:

There were 8 women registered to compete in the Race Discipline. Olivia Piana blasted her way through the start of the first race of the day. She maintained a lead through each mark, and held on to it through the final pumping leg. Flora Artzner was hot on her heels and finished 2nd just a fraction of a second behind her. Orane Ceris managed to creep ahead from the rest of the pack, and finished the race in 3rd.

Olivia Piana rode yet another confident race, showing focus and determination as she managed once again to hold on to her lead throughout the race and another win. This time it was Orane Ceris who stormed through in second place, followed by Bowien van der Linden.

With 35 men registered to compete in the Race Discipline, they were divided into two semi-final heats of 17 and 18 participants in each one. The top 18 then passed through into the final.

Mathis Ghio was unstoppable for the Elimination 1 final, as he sped first through the start first and held onto his lead throughout the entire race, not giving any of the other competitors a chance to steal the lead. Francesco Cappuzzo pushed his hardest to catch up to him but had to settle for second place. Finishing in 3rd, close behind was Maxime Chabloz.

The wind dropped at 3pm, not leaving any time to complete further race eliminations. The prize giving ceremony was held at Balneario Beach in front of the crowds, who were delighted to see not only the Tarifa Wing Pro event winners crowned, but to see the GWA Wingfoil World Champions crowned for the very first time.

It has been an incredible event here in Tarifa, and the GWA would like to thank all of the local organization, the crew and the athletes for making this final event of the year so amazing. We look forward to returning once again next season. 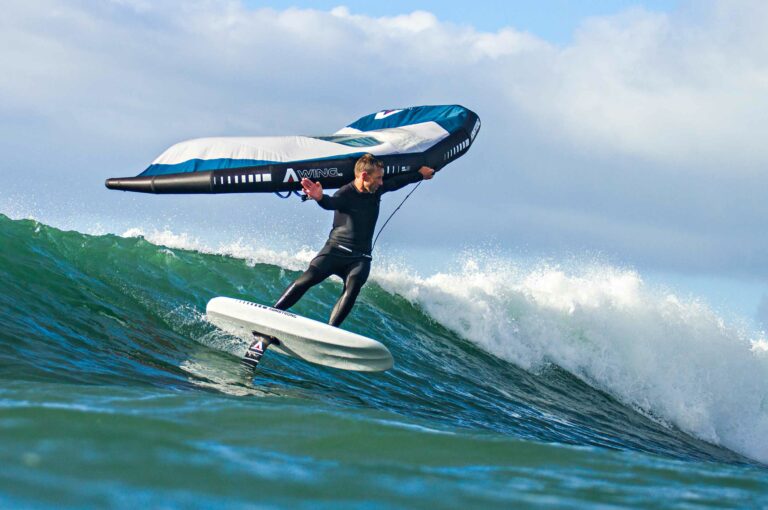 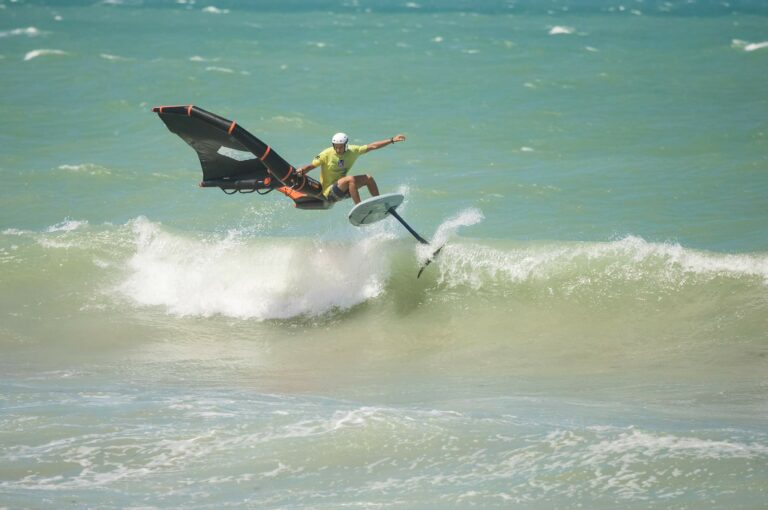 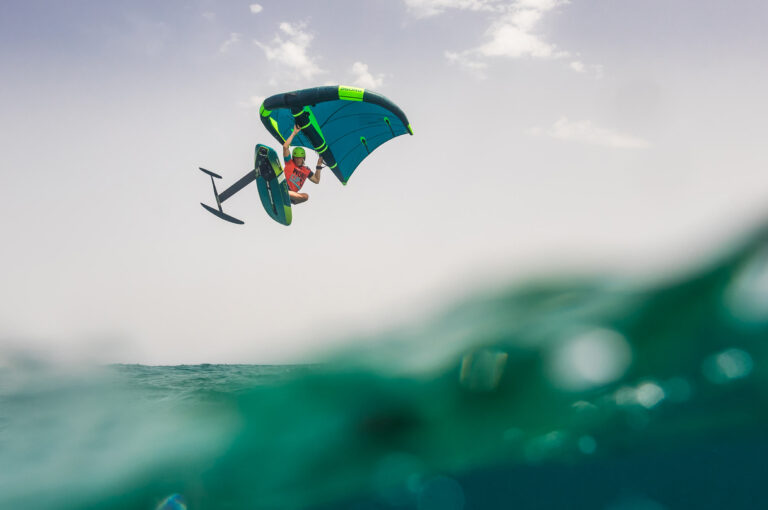 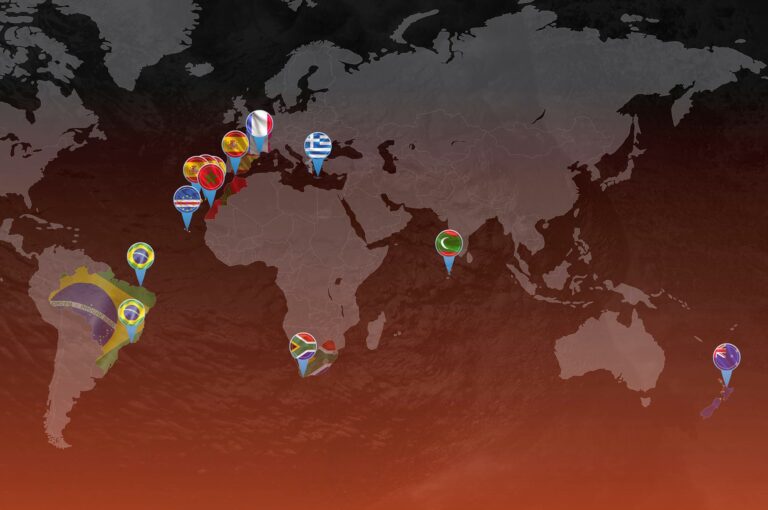