Where will wing foiling take you? Interview with Stefan Spiessberger

One of the really attractive things about wing foiling is that you can launch from a lot more locations than you can kiteboarding or even windsurfing. There’s less gear and less to set-up which opens up a whole range of possibilities. One series we’ll be diving into here at the GWA is “Where will winging take you?” A look at the many different locations, travel destinations and epic launches that winging has opened up.

First up, an interview with Stefan Spiessberger. He just completed an adventure to go wing foil at a few high alpine lakes in Austria.

GWA: What prompted you to start winging?

Stefan: I got really into it during this summer time in Austria. It was the first time in quite a while that I spent all summer on the lakes and even though there are some really good days for kiting, with the wing I started to have fun sessions in 10 knots of wind pretty much every day.

Did you used to windsurf?

I used to windsurf a lot before I got into kiting about 10 years ago. I think it helps to get into the handling of the wing when starting but is not a must at all. That’s another cool thing about it. It’s super easy to get into and with a little bit of a feeling for boardsports and the wind you will get going in no time.

I’ve found wing foiling to be quite the workout. Did you find it hard to learn or did it come naturally?

I think the combination of windsurfing back in the days and kitesurfing made it quite easy for me to get into it. But the workout-level of winging is pretty insane yes! Of course, it all depends on how exhausting you make it on the water but you can really push it if you want to. 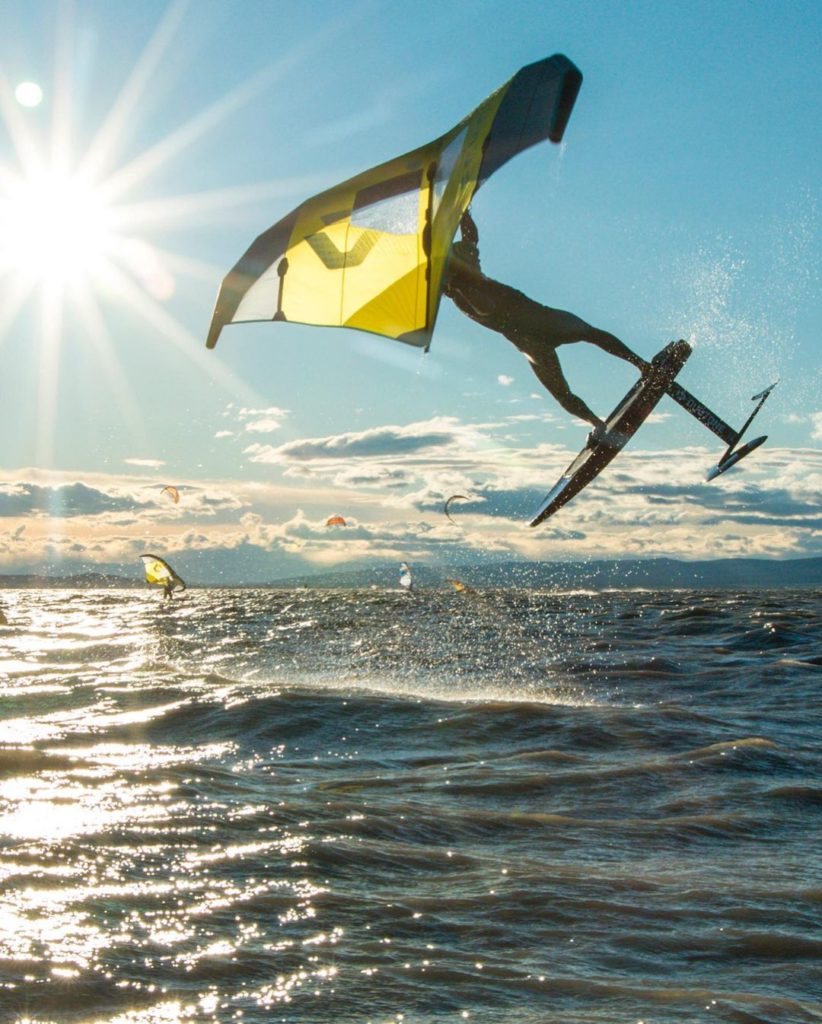 You’ve been a top-level freestyle rider for so long now, how does wing foiling compare to unhooked freestyle?

It’s not easy to relate winging to freestyle kiteboarding I think. There are a few moves that could be transferred from kiting I guess but I think moves on the wing should evolve purely as winging moves. It’s a completely new sport and that’s also the fun part about it. There is no right or wrong. You can be super creative and try anything that comes to your mind basically.

Who had the idea for the climb and how did the planning go?

Summer came along this year and it was obviously really different to the previous years. Travelling wasn’t really possible or enjoyable and we started to look closer into spots that we could have a session at, at home in Austria. Covid times definitely made us think about what projects we could start right at home. So we just thought why not look for the highest lake in Austria’s mountains and try to wing up there. It was all pretty spontaneous and after a few days of planning our route we were up there already. 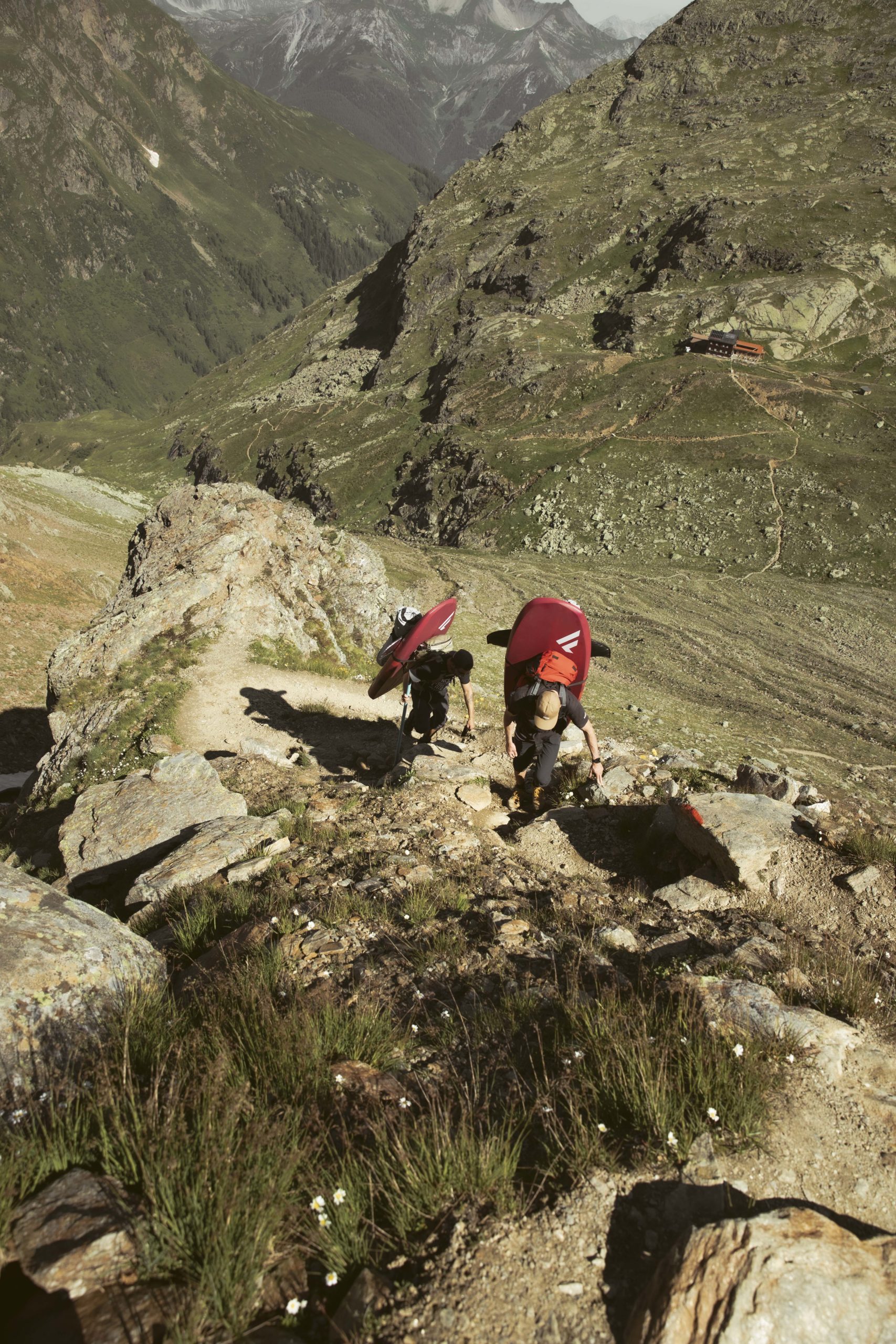 How heavy was all of the gear? What did you bring along?

Max and I both wanted to session at the same time up there so we each brought our full gear with foils, board and wing. It was like 25 kg with all the camera gear and wetsuits that we carried up onto the glacier.

How far up did you climb?

There were 2 lakes that we tried that were at the same altitude. The first one was a pretty heavy climb that took us 3 hours from the closest point that we could access by car. Once we were up there we realized there was zero chance of wind because the lake was sitting really deep in between mountains.

The second lake was a bit more convenient to reach and we “only” hiked for like 1.5 hours one way. Which was still quite a mission with all the gear and after hiking around a few days up in the mountains already. 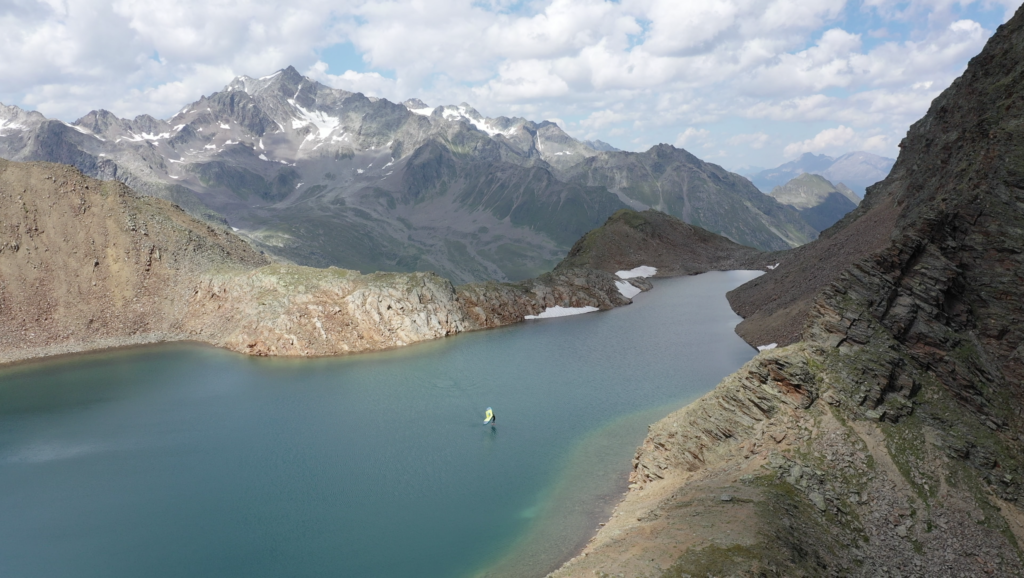 How windy was the lake?

We were lucky that we brought some big wings and foils. There was about 8-10 knots of wind, just enough to have a session. But that’s the thing with winging– you don’t need much wind to have fun.

Were there any restrictions that you had to be mindful of when planning your exploration?

All the locals on the mountains were pretty cool with our little mission and helped us out a lot.

Coolest thing about the adventure?

The whole trip was quite different to anything else I’ve done before. The planning of how to get to the lakes, if there would be a chance of wind and then the winging itself. All of that together made it quite a unique experience.

The hardest thing was actually to find out if the wind could reach those lakes. There are so many high peaks and mountains around that made it super tricky to know when it would be windy. And the hike of course. haha

Where are you going to explore next?

We are already looking into some different spots that could be really cool to wing at. There will be a few more cool sessions and videos coming up for sure. 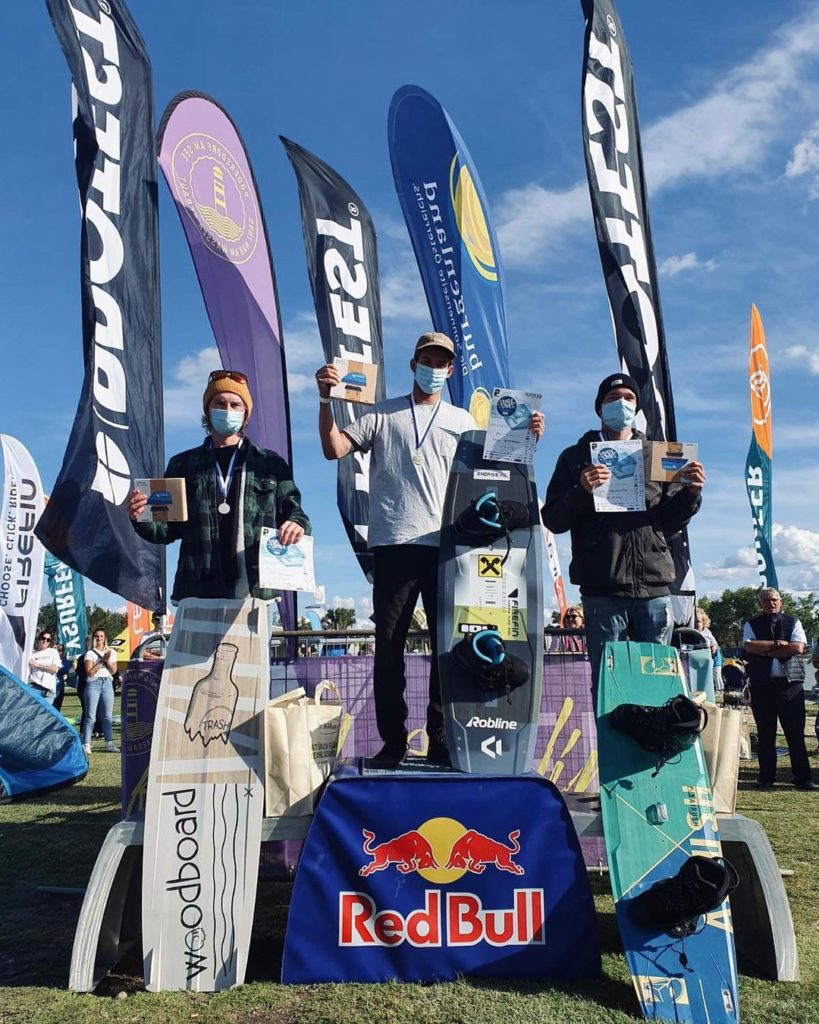 You just won the Austrian championships for winging. What were the tricks that brought it home for you?

It was super fun to get into competing with the wing and really cool to see the different approach from everyone in winging. I landed a few 360 variations that I’ve been learning over the summer that set me apart from the others I guess.

Where do you see the progression of winging heading?

With all the backflips and frontflips that some people are doing right now, I think it will get really cool to watch the freestyle side of winging. But it’s also really impressive to see what some guys are doing in the waves already!

What would you say to someone who’s curious about winging?

Definitely a sport you should give a go! Super fun, easy to learn and you don’t need to live on a spot with perfect wind conditions!

Know a friend that could use this? Send it to them! Want more insights into the world of wing foiling? Sign up for our newsletter!