Where will winging take you? Bobo Gallagher’s Island Crossing 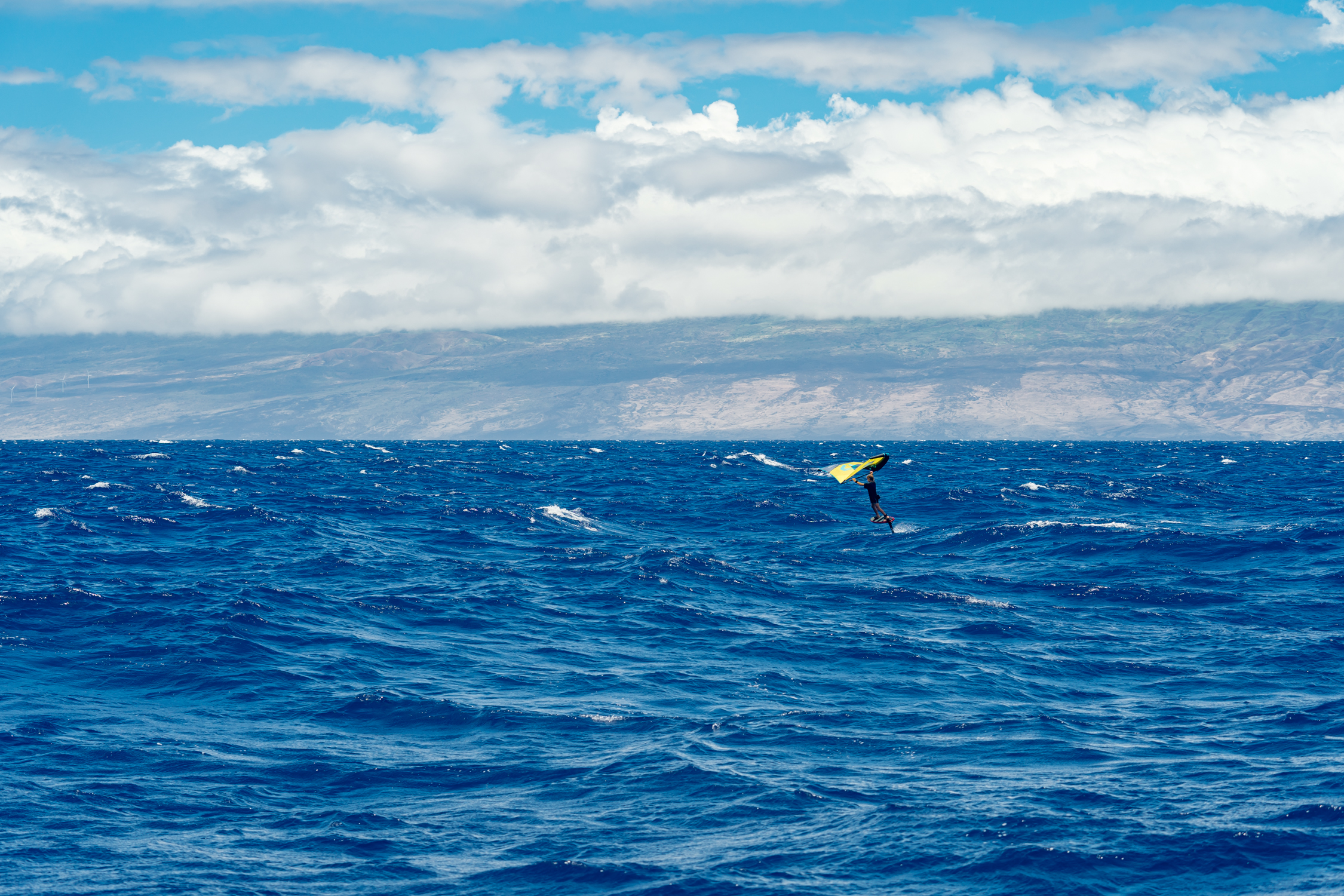 How long have you been wing foiling?

Sky Solbach and Ken Winner let me try the Duotone wing in July of 2019, right at the beginning when the wing first started coming out. I was nine. I really liked foiling and had just finished solo SUP foiling the Maui to Molokai race a few weeks before. Sky gave me a short, onshore lesson at Kanaha and I went out and had so much fun that I had my Dad bring me back to Kanaha for five straight days. I was hooked. I hadn’t done wind-sports before so it was so fun to go upwind or ride the foil continuously without having to “pump out” everywhere. I could go so fast. And then the jumps. Later in the week, I put foot straps on the board and started jumping. It was so fun.

What made you want to do the crossing?

My dad and I had talked when I was eight about doing a big, multi-day crossing using SUP foiling, a race-board, and kiting going from North shore Maui to Oahu before I ever heard of “wingfoiling.” I wanted to channel cross all the islands but the Alenuihaha (channel between Maui and the Big Island) seemed impossible. Only Kai (Lenny) had done it once on a SUP foil but the strong winds pushed west through the channel, creating huge wind swell waves and a wind direction pushing away from Maui and out to sea. Up to that point, the downwinders I had done would eventually push me into other islands at least. The Alenuihaha was different so people almost always stayed away from that one. Once I found the wing, it now seemed possible to do it. I could use the wind to cut across the channel if I could manage the waves. So, crossing the Alenuihaha seemed like a bigger, more exciting challenge than even doing multiple, smaller channel crossings over a few days. 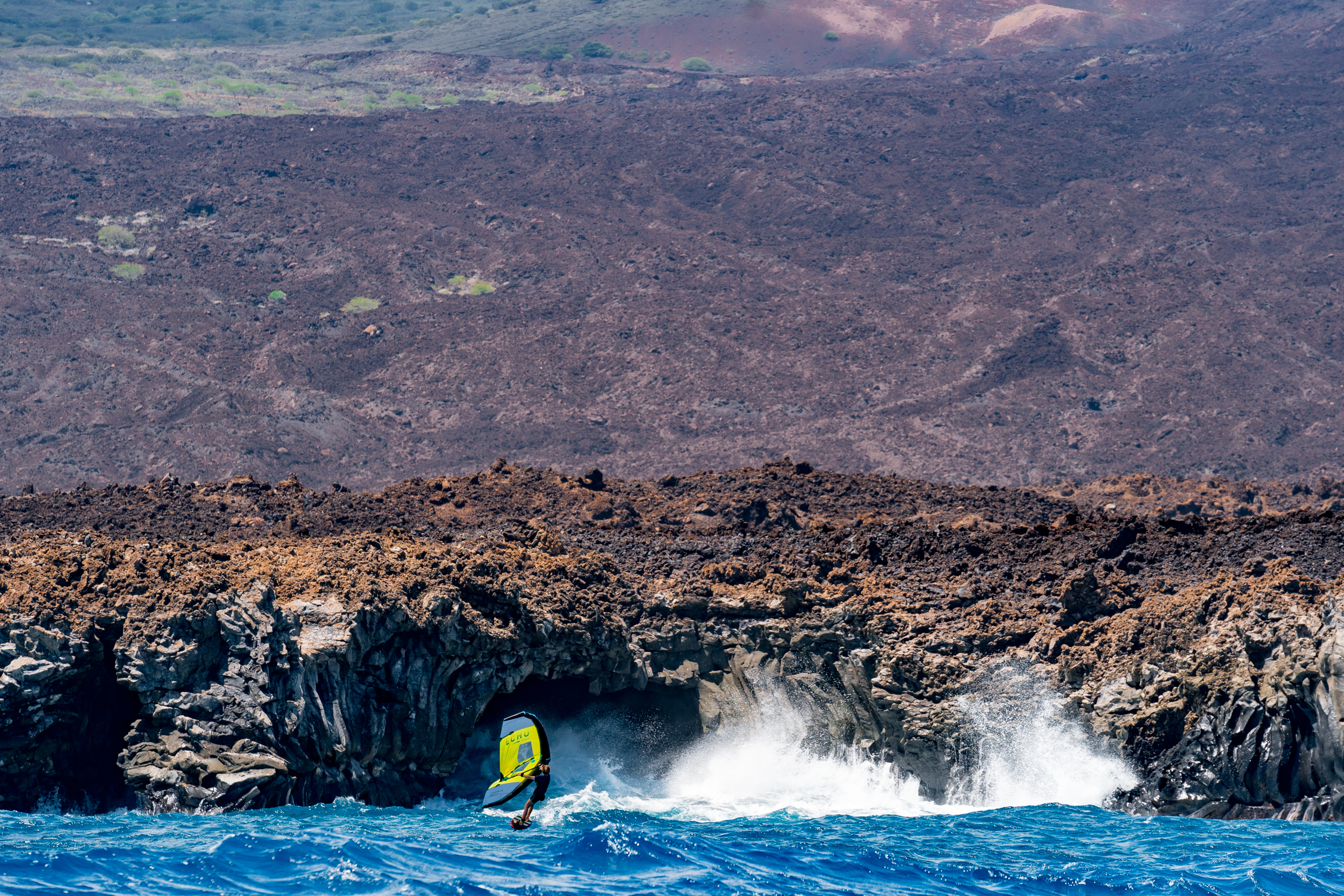 How did you prepare for the crossing?

I prepared for the Crossing by winging a lot. I did a lot of Maliko runs on my Duotone ECHOI. During the two months leading up to the crossing Day, I would build my endurance twice a week by going 30-35 miles a day. That usually meant two or even three Maliko runs back to back and then going back and forth in Kahului harbor till my watch told me I went 35 miles.

Yeah, I was a little nervous. I had put in the training but you never know what can happen on race day. Would the wind be good? Would the wing stay inflated for that long? Would I see a shark? Where was the boat? I mean I had never been in the Alenuihaha channel before so yeah, it was a little scary. I just told myself to take it one step at a time. I knew I had a knife and an Epirb and some extra Duotone wings and even a back-up Fanatic Sky Wing board if I needed them. 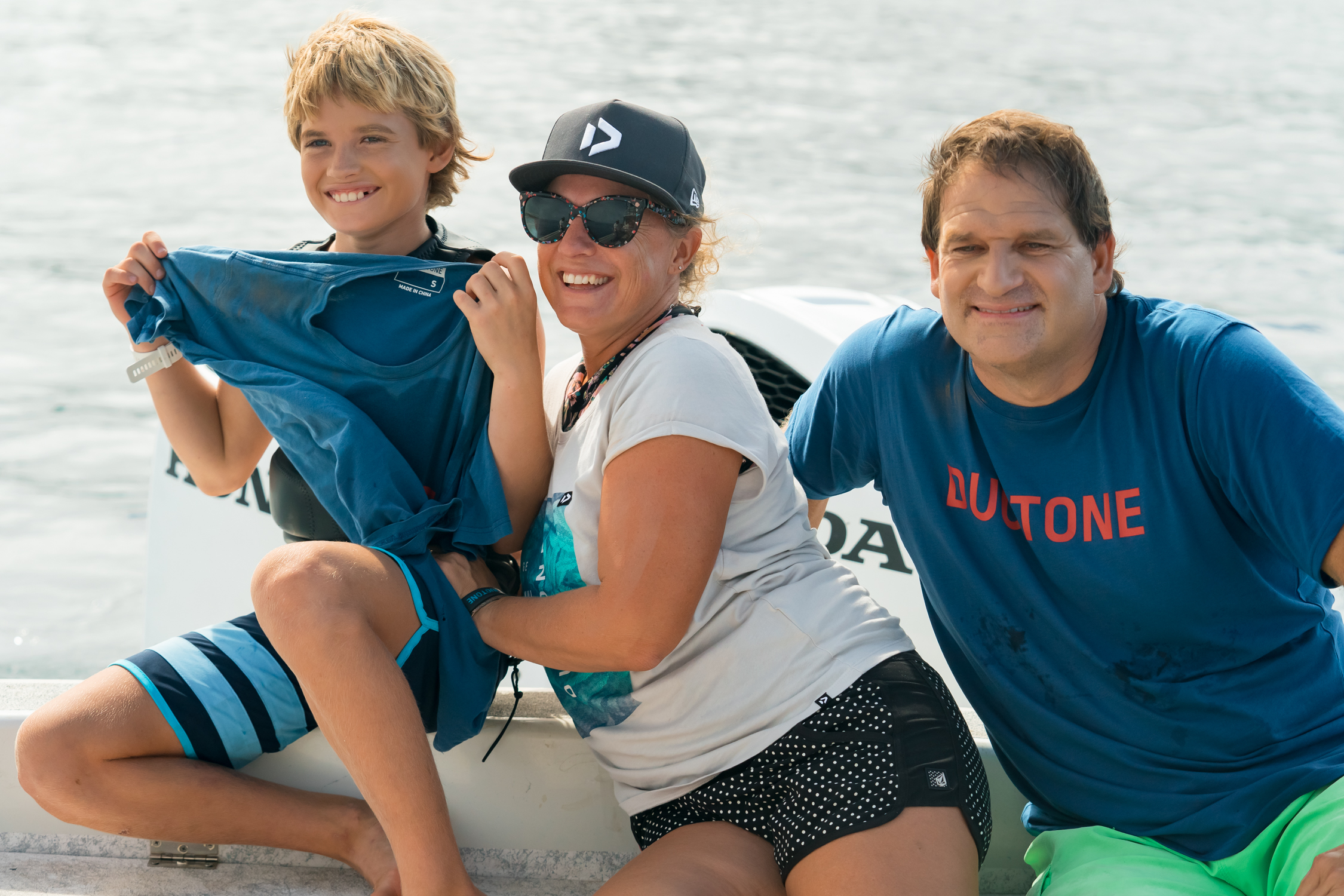 How long did it take you?

t took 4 hours and nine minutes to cross the channel. I could have done it faster, but we had a camera crew with us who wanted to take pictures and get video (see A boy’s journey: Crossing the Alenuihaha on Duotone’s YOU TUBE channel). I did get to do a lot of jumps; that was fun. There were a few times when I had to wait on the boat because it would get really choppy and I could foil over the chop, but the boat couldn’t. It would be fun to do it again and have a helicopter follow me and see how fast I could get across the channel.

What were the conditions like on the day of the crossing?

The conditions on the day of the Crossing were good but a little different than what I was expecting. The wind was lighter than we thought it would be. I thought it would be 20-30 knots the whole time. At the end as we got close to Maui, the wind dropped to 10-15 knots. The waves were big sometimes, but it would have been even more fun if they were bigger. My boat captain said that the conditions turned out to be pretty good for that channel and that even the day before when the boat crew crossed the channel from Maui to go to the Big Island that it would have been much tougher. There were a lot of birds and animals in the channel. 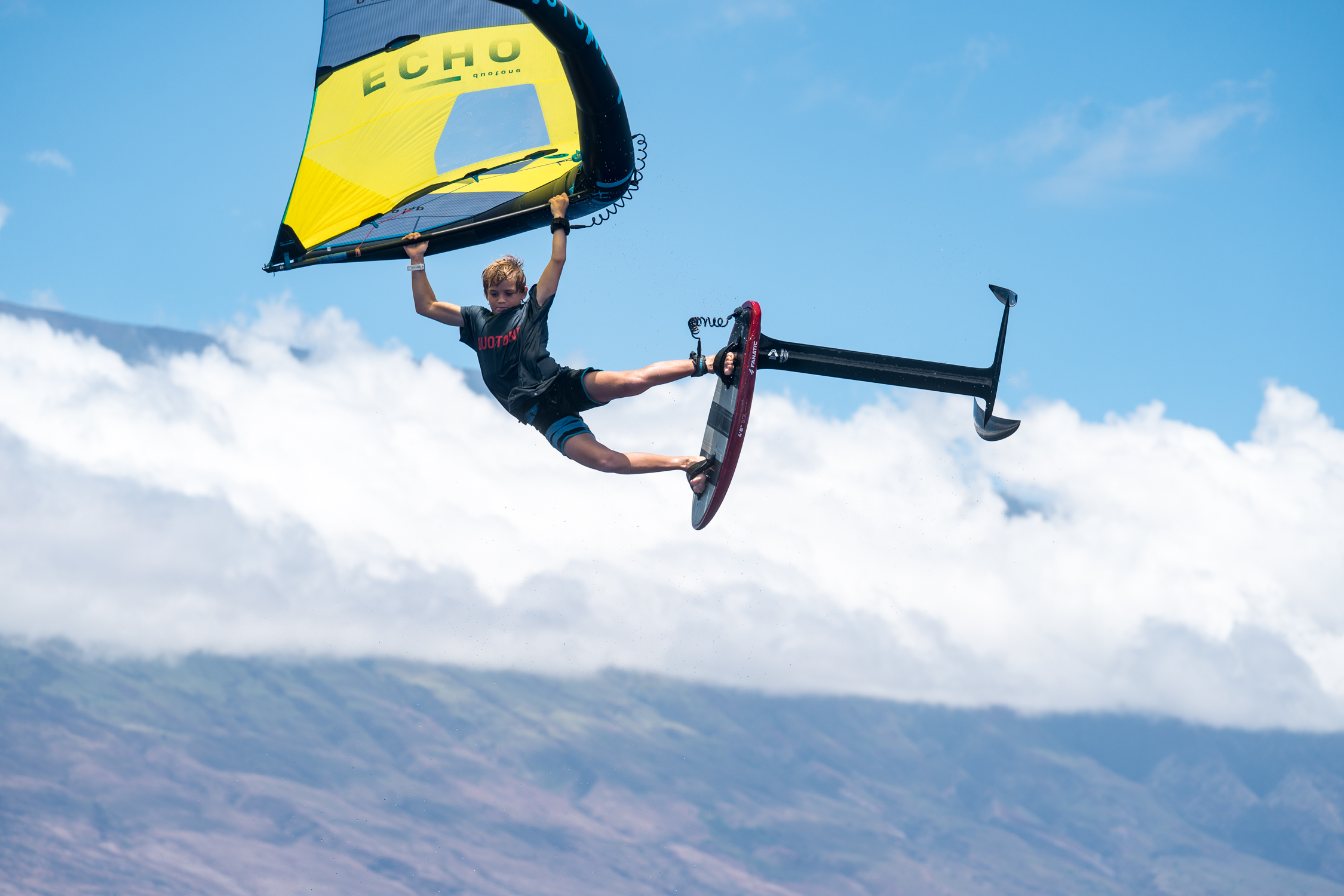 How did you determine what would make the best crossing-conditions? What did you look for before making the crossing?

I felt like the best crossing-conditions would be like the conditions I had been training in…about 20-knot winds. Not too much wind and not too little wind was my worries, but I had my 2.6, 3.3, and 4.0 Duotone ECHO wings ready just in case it got too light or too windy. In the end, I used my 3.3 wing and never had to re-pump it up. The wing was perfect. 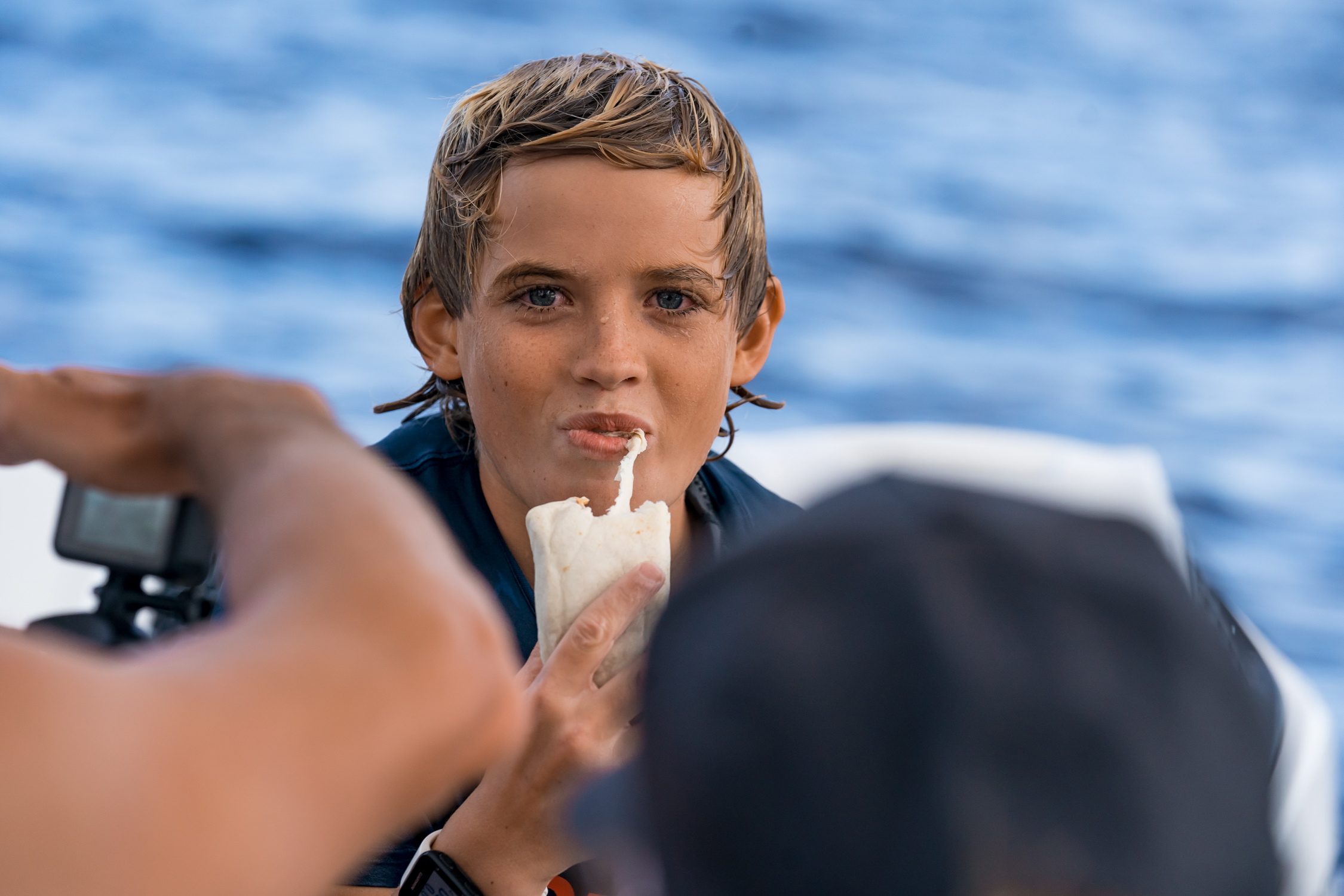 Did you eat anything during the crossing?!

I ate a few things during the crossing. I had some energy bars. I had some bean burritos from Taco Bell because the boat had a microwave but the one time, I tried a burrito on the water it didn’t go so well. I tried to grab a burrito from Josh Riccio (my training partner and my safety officer) on the downwind side of the boat but fell off the foil trying to get the burrito. I was too close to the boat and the wind almost pushed the boat over me but boat captain Matt Smith steered the boat away from me. It is pretty funny to watch it all now on the video.

After so many years being on the edge of achieving...